“Monitors will only be as good as your environment”: an interview with Nahuel Bronzini | NUGEN Audio

“Monitors will only be as good as your environment”: an interview with Nahuel Bronzini

Nahuel Bronzini is a GRAMMY-winning Music Producer based in San Francisco, who has worked with the likes of Tony! Toni! Toné! and Fantastic Negrito. A couple of weeks ago, he told me a little bit about his home studio, and how his workflow has had to change as a result of the lockdown.

Thanks again for agreeing to do this, Nahuel! So could you tell me a little bit about your normal workflow, and any changes you’ve had to make?

"There are things I’ve been trying to do, to keep pushing forward."

Sure, well I’m a music producer, arranger and mix engineer, so it depends on the type of project that I’m doing. Sometimes my workflow involves going into an actual recording facility; there are a couple of projects that I was about to start, tracking with a full band, and they’ve been pushed back to an uncertain time. But there are things I’ve been trying to do, to keep pushing forward.

Some of the artists I work with are able to record themselves, but for some people recording can be a little bit of an obstruction. There’s an app by Izotope called Spire, it’s like a multitrack app you can use to record on your phone, and then you can share stems from there. The Spire cylinder is like a sound interface, and I think it uses a Grace preamp, so it’s fairly clean. That works well for recording some demo stuff.

I also have a home studio, where I do most of my mixing.

How does that compare with the studios where you would normally record?

"I’m a little past the myth that you have to use a studio to achieve a certain quality - I only care about the end result, and if it sounds great then I don’t really care how it was made."

The only real difference is the lack of a specific room to record in, that has specific treatment for reflections. And there’s also the atmosphere that a studio creates! But I’m a little past the myth that you have to use a studio to achieve a certain quality - I only care about the end result, and if it sounds great then I don’t really care how it was made. I have some pretty high grade studio monitors, Meyer HD1’s, and I’m lucky that it sounds pretty good in here! I do have some acoustic treatment, so I’m able to get consistent results as far as mixing goes.

Something that has changed, is that some artists that I usually mix, have also started doing these livestreams and things that need a quicker turnaround. Things that I know won’t be mastered! So I have to take measures to make sure that the audio is, let’s say, “up to code”.

I do use NUGEN plug-ins on a daily basis for some stuff. I’m always looking at meters to see where I am, and to make sure that I leave enough headroom for the mastering engineer to do their work. I use MasterCheck even when I’m mixing, to see how what I’m hearing will translate, loudness-wise. But with these quick projects, I have basically had to master them. I don’t know if I would call it “mastering”, but I’m doing the final delivery.

So you’re paying more attention to the loudness, and making sure you’re at a good level for streaming?

"I’m basically having to double as a mastering engineer for some of these quick turnaround projects, because there isn’t time to send it to mastering."

It’s sad, but people nowadays are on their phone or their laptop listening to these livestreams. Mostly, they won’t hook it up to a full range system, so there are the restraints of the device they’re listening on. You need something that sounds loud enough within that environment. If I send something that’s mix level, something that’s -20 LUFS, it might be too quiet for some devices, and that would be a shame.

So I’m basically having to double as a mastering engineer for some of these quick turnaround projects, because there isn’t time to send it to mastering. It’s not so much about the tonal balance, it’s more about the specs of how loud it should be for a certain platform. 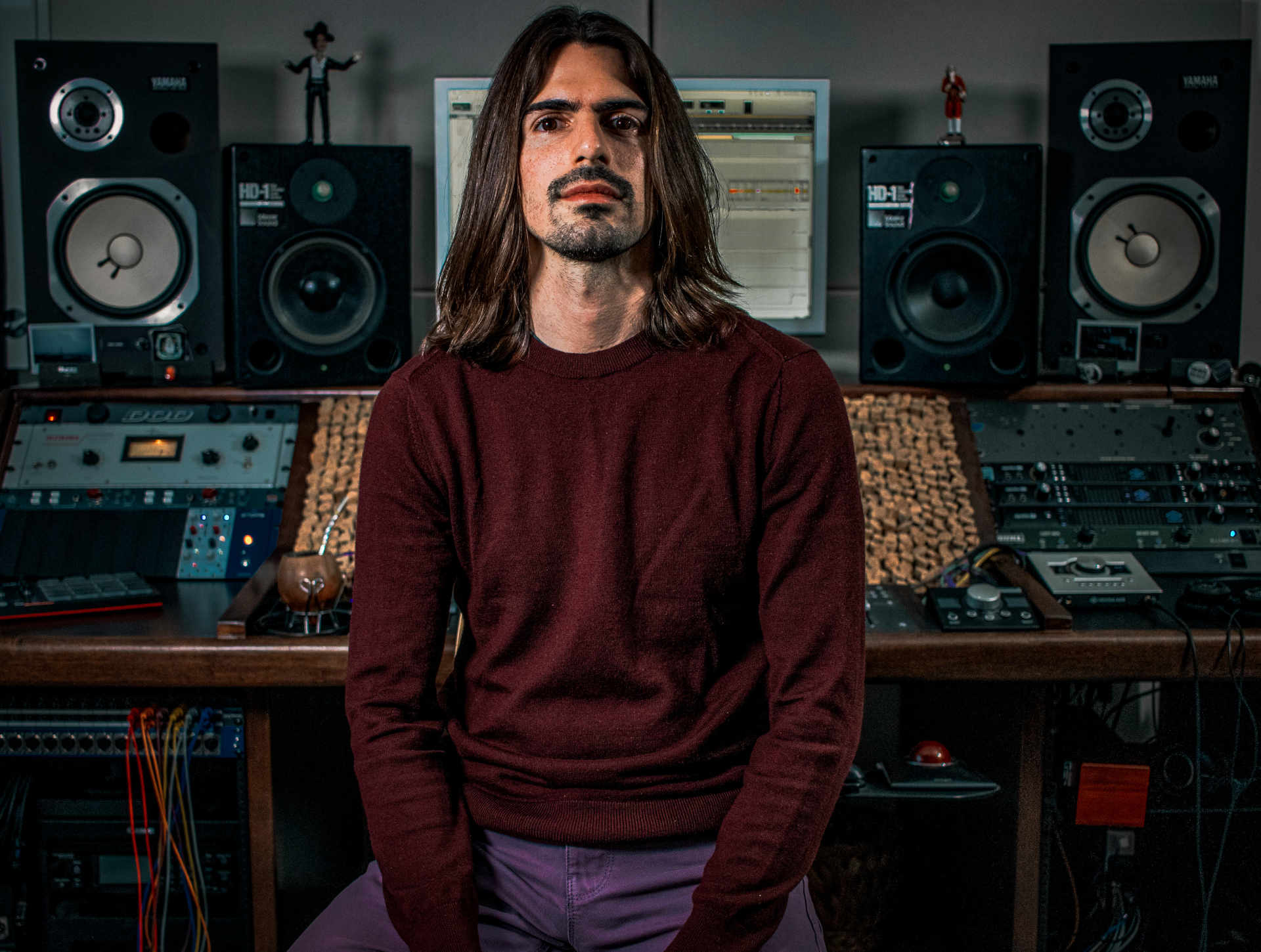 When we spoke a little while ago, you mentioned you used a lot of NUGEN plug-ins on your work with Fantastic Negrito, particularly the ‘Chocolate Samurai’ single. Can you tell me a little bit about which NUGEN plug-ins you used, and how you used them?

"Especially with funky music with that kind of rhythmic punch, you want the bounciness to be on point, otherwise you’ll kill the groove."

There’s two plug-ins that I used a lot, but in different ways. One is the Monofilter, which is like an elliptical filter which narrows the stereo image below a certain frequency. I like the way that it has a slope to control how much I can narrow, and where, and how you can choose whether you want it to go fully mono or not. So that record, the Fantastic Negrito album, has a lot of loops, and those little lo-fi drum loops might sound a little “loose”, if you know what I mean. The low end gets kind of wavey, if you don’t use something like Monofilter. Especially with funky music with that kind of rhythmic punch, you want the bounciness to be on point, otherwise you’ll kill the groove. And it’s important because this record is being cut on vinyl!

Sincerely, I just want to make something that sounds awesome, but I do have to check things like the width. My motto is “How does it sound? Does it sound awesome? Okay, I’m happy.” But I do check mono, and especially low down there, it can be a problem, so I try to find a happy balance.

Would you use Monofilter on the master track, or on individual elements?

"I am very detailed with vocal work, especially lead vocals and things that are gonna be in the foreground."

Only on specific elements, because you have to be careful not to mess with the overall image. It’s not so much about the overall width of the bass at all times, it’s about the width of elements that have more of a sustained role. I think if something is very wide in the low end just for a moment, if it’s an explosion or an effect, then that’s okay. But the constant ongoing groovy elements, if they aren’t tight, it’s a problem.

The other plug-in that I use is the ISL limiter. But I don’t really use that on the master either, I use it on specific individual elements, and sometimes I crush it quite a bit. I like the way that it colors if you push it a lot, which is not what it’s meant for, but I like it. I like the way the interface works, where I can just set a threshold and push the input, like an 1176. I like that when I push the threshold down, it doesn’t push up the level. I can just set it as a ceiling, without it being a unity gain kind of plug-in.

I am very detailed with vocal work, especially lead vocals and things that are gonna be in the foreground. Sometimes there’s little transients and things that I want to take care of before they go into a more aggressive or more colorful compressor. I’ll have the vocal where I like it, and then bring down the threshold on ISL just to catch a little bit. It’s very clean in that way, you can barely hear what it’s doing.

That makes sense, when I’m working on my own music I use ISL in a similar way! Is there one piece of advice you’d like to give to other audio professionals working during the lockdown?

"For some things, headphones are even better than speakers. For detailed work, you will notice clicks and pops. The room is completely out of the equation, even using open-back headphones."

Monitors will only be as good as your environment, because sound will bounce off your walls, so my advice would be to invest in a decent and trustworthy pair of headphones. I think headphones can be really helpful now that people are working in unusual environments. For some things, headphones are even better than speakers. For detailed work, you will notice clicks and pops. The room is completely out of the equation, even using open-back headphones.

I use Grado SR80e’s. They’re the base model and they’re not hyped at all, they’re open-back and they’re pretty comfortable, and very light. They don’t make things sound too pretty, so it feels like an easy transition from monitoring on my HD1’s. So that’s my advice, find a pair of headphones that you feel comfortable with, and that you can have as your safety check. It’s definitely a much better alternative than being in a room that’s totally unknown, where results can be very deceiving.

That makes a lot of sense, it’s gonna be consistent regardless of what room or space you’re in. I think that’s good advice! Thanks a lot for doing this, let’s stay in touch.